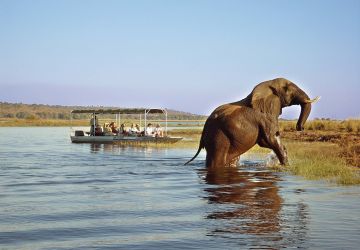 Botswana is a sprawling African wilderness of savannah, wetlands, deserts and wide open spaces that just beg to be explored by a group of adventurous overlanders. Ideal for nature lovers, seekers of exceptional wildlife experiences and those looking for a true African adventure, Botswana’s parks and reserves like the Okavango Delta and Moremi Game Reserve offer a true walk on the wild side.

But Botswana is not all about the Delta; Chobe National Park is home to the biggest elephant population in southern Africa, while the incredible Kalahari Desert stretches off right down to the South African border. With 17% of the country a national park, and the further 20% as a protected wilderness, an overland safari through Botswana is really all about the wildlife.

If you’re overlanding through this wildlife-rich country, make sure you take time to enjoy a mokoro trip, a bird-watching walking safari or a scenic flight over the lush water meadows – there really are a lot of great Botswana activities to make your trip extra special. 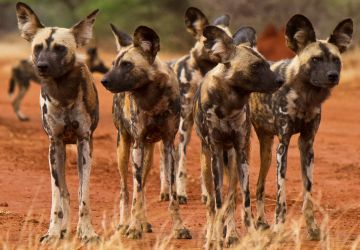 A Botswana overland safari to any of these great natural wilderness areas is truly hard to beat.

Flanked by the two largest rivers in the Delta, the Boro and the Santantadibe, Chief’s Island is the largest landmass within Moremi – its dry sandy interior of 1000 sq km full of tall mopane trees, clay pans, and of course, wildlife.

Ideal for an overland safari adventure, this well-known Botswana reserve is known for its large elephant herds who migrate from nearby Chobe National Park in search of water. Other wildlife includes the entire Big 5, as well as giraffe, cheetah, hyena, jackal and the endangered wild dog.

Botswana Overland tours to Moremi usually include time in both the greater Okavango Delta and Chobe, but it’s Moremi where wild dog is most regularly seen.

Long bridges made out of mopane poles surround the reserve, which rattle and shake as vehicles pass over them. These bridges are also used by game to get onto the permanent higher ground and it’s not uncommon to see lions strolling over them to cross a floodplain when it’s full of water.

Moremi simply is the Botswana wilderness at it’s best; a true African heartland home to a diverse wildlife, over 550 bird species and spectacular natural scenery. It’s a must-do on an overland Botswana safari.

Gliding along an endless watery channel in a mokoro (dug-out canoe) is the best way of discovering Botswana’s Okavango Delta. Hippos grunt, crocs slither and birds chirp in a surround sound wilderness experience – offering you a chance to encounter nature at its best.

The Delta waters start in Angola’s western highlands, flow through Namibia as the Kavango River and finally reach Botswana as the Okavango. A staggering 30 000 million litres of water per day drains through the maze of lagoons and channels before dying in the hot sands of the Kalahari Desert to the south.

An overland adventure in Botswana will most certainly take in the delights of the Okavango Delta; there’s nothing quite like flying low over the floodplains from a tiny 10-seater!

Big game like elephant, lion, hippo and giraffe are seen loping through the waters, while red lechwe are often seen springing along in a close-knit group, water flying everywhere.

The Okavango Delta is also ideal for a birding safari or a fishing expedition; hundreds of bird species and over 80 different types of fish are one of the reasons the Delta attracts visitors year on year.

On an overlanding tour, you’ll be flown in to experience a few days of game-viewing in a rugged Land Rover, before meeting your mokoros and polers to spend a couple of days drifting through the watery channels crammed with water lilies – one of the best activities in Botswana hands down!

The Chobe River in the north-east is surrounded by lush plains and dense forest, while the central region has both arid plains and deep swamps.

The predator-rich Savuti Corridor in the west leads to the Moremi Wildlife Reserve in the Delta, making this area ideal for an overland safari adventure.

Safaris are one thing, the enormous elephant herds are quite another. The park is famous for having the largest continuous surviving elephant population in Africa, estimated at a staggering 120 000 – gathering during both the wet and dry seasons.

A must do on an overland tour through Chobe is a boat ride on the Chobe River; gin & tonics, splashing elephant calves, and huge buffalo herds congregating on the banks.

It simply is a must do on any Botswana safari.

These vast pans in north-eastern Botswana are some of the largest in the world, and while dry and barren in the winter months, they flourish with flora and fauna in the rainy season. Explore at dawn or dusk on a quad bike, and make sure you bring along your camera. 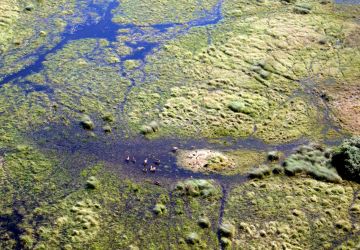 On the map (or from the sky), Botswana looks like an untamed wilderness, home to nothing more than beautiful parks & reserves, incredible game and a few camps. But believe it or not, Botswana has a number of cities and towns, most of which are set in the southern part of the country.

However, for safari and adventure purposes, it’s Maun – the ‘Gateway to the Okavango Delta’  and Kasane – on the border of Chobe National Park and Zimbabwe that are the travel destinations for overland adventurers.

Although the modern city of Gaborone in the extreme southeast is Botswana’s capital, very few travellers pass through that city en-route to Botswana’s parks and reserves in the north. Rather, it is Maun that generates the most towards the tourism industry.

Ideally located just south of the 15 000 sqkm wilderness that is the Okavango Delta, Maun’s greatest draw cards are its safari and air-charter operations providing a way for travellers into the Delta where Botswana activities like mokoro trips are renowned.

Most Botswana travellers are likely to head to Maun from Kasane on the northern border, or from Moremi Wildlife Reserve in a 4×4, but many choose to fly directly from Victoria Falls or Johannesburg in South Africa.

The name Maun is derived from the San word ‘maung’, meaning the place of short reeds. However, Maun is not an attractive town; few trees stand, the roads are a bright, white concrete and the sun is hot. But a number of hotels, restaurants, bars and camp sites offering ice-cold beers and cool drinks make this the perfect introduction to Botswana for overland travellers.

Just 80km from Victoria Falls, the tiny and rather insignificant village of Kasane is found in the far north, near the Zimbabwe border post and close to Chobe National Park.

This strategic location as the meeting point between Zambia, Zimbabwe, Botswana and Namibia means Kasane sees a whole lot more Botswana travellers than other towns its size.

Kasane lies on the banks of the Chobe River, making a boat trip on the river a must do if you’re staying overnight. Overlanding in Africa is always an exciting and challenging experience, and with no boundary fences between the park and village, elephants are frequently seen wandering down the main street.

Watch out for crocs! 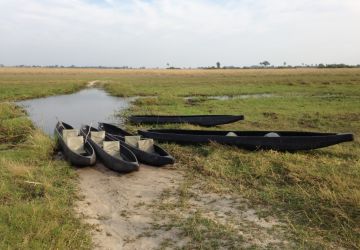 Botswana activities are all about the big adventure: traversing the country’s most epic wilderness by boat, mokoro, vehicle or even on foot.

Imagine the sounds of the reeds gently rustling, the water rippling below you and the quick flutter of a pair of wings as a brightly coloured bird flies off. A mokoro excursion through the Okavango Delta is simply an un-missable experience on a Botswana overland tour.

A traditional dug out canoe, a mokoro doesn’t impact negatively on the environment, plus it gives you a croc’s eye view of this incredibly watery paradise. Simply climb in, lean back and enjoy the view as your poler takes you on a unique journey through the Delta.

If you’ve slept in, and you’re keen to get back out into the Botswana wilderness, nothing can beat an afternoon boat trip or cruise on the Chobe River.

These river cruises bring you up close to crowds of elephant, bellowing hippo and slinking crocodiles, all the while being a perfect spot to enjoy an unforgettable Botswana sunset with gin & tonic in hand. It’s a must do for any traveller keen to unwind and still enjoy the beauty of their surroundings. Remember to bring along your camera – there are plenty of fantastic wildlife opportunities to be had! 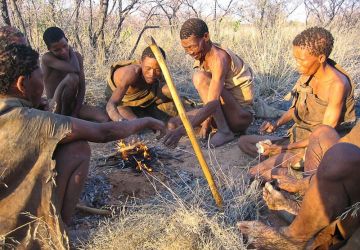 The first people to inhabit the empty Kalahari some 30 000 years ago were the San – also known as the Bushmen. They number only about 55 000 today, constituting a small but fascinating cultural minority in the country. From the 15th century the Tswana people arrived, collectively called the Batswana (the word today refers to anyone living in Botswana). By the 18th century, these people had established a powerful highly structured society of towns ruled by monarchs who controlled hunting, cattle-breeding and copper mining. The European Christian missionaries who pitched up in the early 1800s were most impressed with the orderliness and structure of the town-based Batswana people.

The Zulu wars of the early 1800s in what is now South Africa produced a wave of northbound migration into Botswana land. Meanwhile, the Boers began their Great Trek over the Vaal, crossing into Botswana and attempting to impose white rule on the inhabitants. By 1877, animosity had escalated to such a level that the British stepped in and the first Boer War erupted in the Transvaal. The Boers retreated further into Botswana in 1882, prompting the Batswana leaders to ask for British protection. The British agreed and drew up borders. In 1885 they declared the northern territory as a British protectorate known as Bechuanaland, today’s Botswana. The southern territory became part of the Cape Colony and is now part of the Northwest Province of South Africa. The majority of Setswana-speaking people today live in South Africa. Bechuanaland was eventually brought under full British colonial control in 1890, when the British South Africa Company was established to supervise the whole region. Later in 1909 Bechuanaland, along with Lesotho and Swaziland, declined to become included in the Union of South Africa.

Nationalism built during the 1950s and 1960s, and as early as 1955 it had become apparent that Britain was preparing to release its grip. Following South Africa’s Sharpeville Massacre of 1960, the Bechuanaland People’s Party (BPP) was formed with independence as its aim. Despite Bechuanaland being dependent on South Africa for food imports and on the wages of Botswana miners working in South Africa for income, the BPP opposed apartheid as well as the Smith regime in neighbouring Rhodesia. In 1964, Britain accepted the BPP’s proposals for the independent democratic self-government of the newly-named Botswana, the seat of government was moved from Mafikeng in South Africa to the new capital of Gaborone in 1965, and independence was achieved by 1966. Seretse Khama was the first president who was subsequently re-elected until he died in office in 1980. He was succeeded by Ketumile Masire who was president from 1980-1998, and the current president is Festus Mogae.

Botswana was economically transformed by the discovery of diamonds in 1967 – the diamond mines of Orapa, Letlhakane, and Jwaneng together make up one of the largest reserves of diamonds in the world. This mineral wealth has provided the country with enormous foreign currency reserves, pushing the pula to its position as one of Africa’s strongest currencies. Botswana has always been a peaceful and safe country, and the vast majority of travellers to Botswana have nothing but praise for it.

Okavango Delta A trip on the Okavango Delta will have anyone mesmerized.
The King! See the King and his family lazing in the sun..
Sunset Cruise Dont miss out on a Sunset Cruise on the Chobe River
Elephant Gathering Seeing these elegant elephants are always an experience! 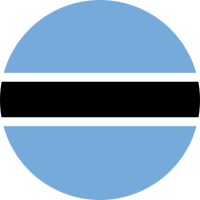 Be the first to recieve email updates on all things Overland, latest specials, practical hints, tips, and things you didnt know about Overlanding through Africa.