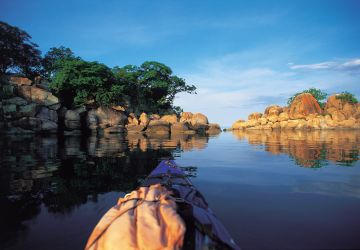 Malawi is a thin sliver of a country landlocked between Mozambique, Zambia and Tanzania, and is often bypassed by travellers on their way to East or Southern Africa for safari.

But Malawi is a destination in its own right, and while densely covered in mountains, forests, game parks and villages, its biggest attraction is enormous Lake Malawi, home to amazing dive sites, tiny islands and over 550 species of fish.

Many Malawi overland tours and safaris take a few days off from their busy schedule to relax by the lake, fish, dive, swim and enjoy fresh seafood, while some tours venture deeper into Malawi’s wilderness areas or cities like Lilongwe.

Known as the ‘warm heart of Africa’, the Malawian people are probably the friendliest in Africa, and proud of their impoverished yet beautiful nation. Overland travellers in Malawi can enjoy superb bird watching, laze away in hammocks on the lake shore or buy a wood carving or two. But most visitors marvel at the great scenery and enjoy a laid-back African atmosphere. 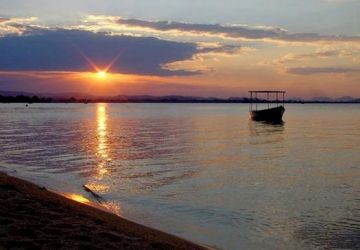 Malawi is dominated by huge Lake Malawi, which stretches 590km and covers 20% of the total country! But the Lake is not the only Malawian destination; many overlanding tours to Malawi visit bustling Lilongwe, while the northern and southern regions are worth exploring.

As the third largest lake in Africa, massive Lake Malawi dominates the tiny country, occupying over 20% of Malawi’s total area.

Any overland tour group travelling through Malawi are sure to stop off at the lake and enjoy endless sandy beaches, great diving and snorkelling, eons of fresh seafood and friendly locals.

Part of southern Malawi has been proclaimed a World Heritage Site for having the richest variety of tropical fish of any freshwater lake in the world. David Livingstone described Lake Malawi as the ‘Lake of Stars’, referring to its glittering surface.

It’s a great stop on an overland safari adventure; overlanders can take time out to relax on the beaches, play soccer with the local kids, drink traditional Malawi beer and even try their hand at fishing!

Southern Malawi is the greatest draw card for travellers to Malawi: lodges, hotels, golf courses and airstrips populate Lake Malawi’s southern shore, with plenty of uncrowded beaches and a variety of watersports available on the lake.

Most overlanders will take a trip out to Cape McLear, the springboard for the Lake Malawi National Park. Declared a World Heritage Site, this part of the lake is full of tiny islands, and great diving and snorkelling spots.

Other attractions in Southern Malawi include Blantyre, the main commercial town in Malawi, and 3000m Mount Mulanje, Malawi’s highest mountain.

The far north of Malawi is the most beautiful, and its remoteness means it’s much less populated than southern Malawi.

The lake is at its widest here, but on a clear day you can see Mozambique 80km away! This is the best spot for a remote African holiday: horse riding on the beaches, diving or snorkelling in the Lake or simply swinging in a hammock.

For Malawi overland adventurers wanting a taste of the wild, the impressive Nyika Plateau National Park in northern Malawi has excellent hiking, trekking and horse-riding opportunities. Even further north is the tiny town of Mzuzu , where you’ll inevitably pass through on the way to and from a Tanzanian safari.

Lilongwe has been the capital city of Malawi since 1975, and is situated in the fertile central region of the country. Split into the New and Old towns, Lilongwe is a thriving modern yet distinctly African city.

Malawi overland tours usually pass through Lilongwe to pick up supplies and enjoy some curio shopping. Overlanders can change money and go shopping in trendy New Town, or wander through bustling markets with its vibrant vendors in the Old Town.

Lilongwe isn’t really a stopover like Nairobi is, but overlanders can still immerse themselves in the Malawian culture, with stops at the curio markets often heralding the odd find.

Be careful when buying souvenirs though; sometimes curios are not quite what they seem, and you could end up paying for more than you bargained for! 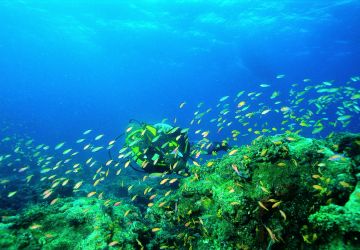 Lake Malawi is widely recognised as one of the best freshwater diving destinations in the world; its safe, shark-free and calm surface water makes diving here ideal for beginners and experienced divers.

There are several dive schools with PADI certified dive masters along the coast, so overlanders can explore the depths of the Lake, home to over 500 species of fish. Visibility varies: it’s best to go between August and December when the weather is calm.

The Nyika Plateau National Park in northern Malawi is made up of rolling grasslands, forested valleys, steep escarpments and several peaks, and hikes here often trail through some of the local villages.

Warthog, bush pig and even buffalo have been spotted on the lower slopes, while the scenery is unbelievable: waterfalls, trout pools and wildflowers flourish in the grasslands.

Other great hiking and trekking spots in Malawi include the escarpment hike to Livingstonia which passes the Machewe Falls, and more challenging Mount Mulanje in the south.

Horse-riding? In Malawi? Believe it! Horseback safaris are popular in the Nyika Plateau National Park, a 3000km² wilderness in northern Malawi.

Malawi overland tours often allow for a couple of days along one of the beaches, and at Chintheche on the northern shore, horse-riding can be organised from almost any lodge.

It’s simply spectacular riding through the reserves and wilderness areas and ending with a swim on horseback in the calm waters of Lake Malawi.

The tideless and current-free waters of Lake Malawi make it an ideal destination for watersports like boat trips, pedalo, canoeing, hobicat sailing and even kayaking.

Travellers on a Malawi holiday or overland trip can explore the serene blue-green waters of the Lake with any number of watersports, or discover its depths with swimming, snorkelling and diving.

The simplest way to take a float on the lake is in traditional wooden dug-out canoes – just hitch a ride with a local fisherman. 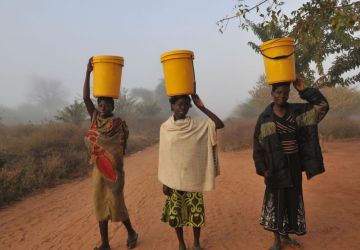 Malawi was once called Maravi, meaning ‘reflected light’. Perhaps this referred to the brilliant glitter on Lake Malawi as the sun shines on it. Throughout history, people have been attracted to the region by its stable climate, regular rainfall and the ample supply of fish in the lake.

People lived undisturbed in kingdoms governed by chiefs, before Arab and Portuguese slave traders penetrated central Africa and caused havoc in the 18th century. Dr David Livingstone first set eyes on the great lake in 1859. By 1875 the Scottish Presbyterian Church had founded its first mission at Cape MaClear, followed by more European settlers who began to farm the land. With the growth of commerce and expanding plantations, Malawians migrated towards the settlers’ farms in search of work, and towns and villages were established. Colonial domination became inevitable, and in 1891 the British declared the country the British Protectorate of Nyasaland.

In 1953 the British federated Nyasaland with Northern and Southern Rhodesia (now Zambia and Zimbabwe). Nyasaland seceded in 1963, following elections won by Dr Hastings Banda’s Malawi Congress Party. Nyasaland became independent from Britain in 1964 and was renamed Malawi. Two years later Dr Banda declared it a republic and a one-party state.

His regime was harsh and by 1971 he had declared himself President for Life. Any opponents of his government were thrown in jail or out of the country. His policies were off the wall: it was against the law for men to have long hair and for women to wear anything but skirts.

Banda’s foreign policy also attracted widespread criticism: he supported the apartheid regime in South Africa – the only black-ruled African state to do so. This cosy relationship with South Africa funded the construction of the new capital, Lilongwe (the capital had previously been at Blantyre), which opened for business in 1975.

In 1992 Malawi experienced acute shortages of food because of poor harvests affected by drought and the need to provide food for some one million refugees who had fled the war in Mozambique. People demanded change, and by 1993, the ailing Banda was forced to concede.

A referendum in June endorsed the transition to a multi-party democracy with a new constitution. Elections were held in 1994. They were won by Dr Bakili Muluzi while Banda was recovering from brain surgery in South Africa. When he returned to Malawi, the ageing Banda and his chief henchman, the much-hated and feared John Tembo, were put on trial for their alleged role in the 1983 murders of four opposition politicians. But the trial was inconclusive upon Banda’s death in 1997. Muluzi won a second term in office in the 1999 election.

Malawi is one of the poorest counties on earth, and most of the ten million people rely on subsistence farming or fishing to survive. Drought and poor harvests in recent years have led to shortages in maize, the country’s staple food. Malawi often has to look south to the richer nations for food aid. Despite this, the Malawian people are generally happy and friendly, and any traveller to Malawi will be made to feel most welcome.

Read more up on our featured Malawi destinations or adventure activities, or simply browse our Malawi overland tours.

Malawi Tropical Waters You can happily spend your entire Malawi vacation in and around the lake but away from the beaches and dugout canoes the traveller will discover that the country's mountains, forests and wild reserves are well worth exploring
Likoma Island Perfect view of Likoma Island, Malawi
Fish Eagle Malawi will take you to footprint-free stretches of sand and deserted tree-covered islands where you can laze on your sundeck accompanied only by the cry of a fish eagle.
Activities Lake Malawi has lovely sand beaches and calm clear water filled with so many colourful fish that it often feels like you're swimming in a giant aquarium. Snorkelling, diving, sailing or kayaking top the list of activities

Be the first to recieve email updates on all things Overland, latest specials, practical hints, tips, and things you didnt know about Overlanding through Africa.